<!-- JSON-LD markup generated by Google Structured Data Markup Helper. --><script type="application/ld+json">{  "@context" : "http://schema.org",  "@type" : "Article",  "name" : "Top 10 books leaders read",  "author" : {    "@type" : "Person",    "name" : "Robin Kiera"  },  "articleSection" : "In my interviews with entrepreneurs, thought leaders, and influencers, I often pose the question, “What are the top three books everyone working in digital transformation needs to read?” Responses have ranged from the practical and analytic to the wild world of influential science fiction. In the spirit of the upcoming holidays, I thought I’d present the Top 10 books leaders read and recommend for those interested in disruption, digital transformation, and the fintech and Insurtech industries. There is just so much choice out there for reading material, and so much content – I thought I’d make everyone’s lives a little easier and give an orientation of the best books mentioned by my amazing interviewees.",  "articleBody" : [ "Sapiens and its sequel Homo Deus by Yuval Noah Harari", "Zero to One by Peter Thiel", "The Innovators by Walter Isaacson", "The FinTech Book by Susanne Chishti and Janos Barberis", "Everybody Lies by Seth Stephens-Davidowitz.", "Nudge by Richard H, Thaler", "FinTech Innovation by Paolo Sironi", "The Dip by Seth Godin", "Social Selling: Techniques to Influence Buyers and Changemakers by Tim Hughes", "The One Thing by Gary Keller", "A Little Bonus – Science Fiction!" ],  "url" : "http://www.peoplehum.com/blog/10-books-thought-leader-influencers-and-entrepreneurs-really-read",  "publisher" : {    "@type" : "Organization",    "name" : "peopleHum"  }}</script> 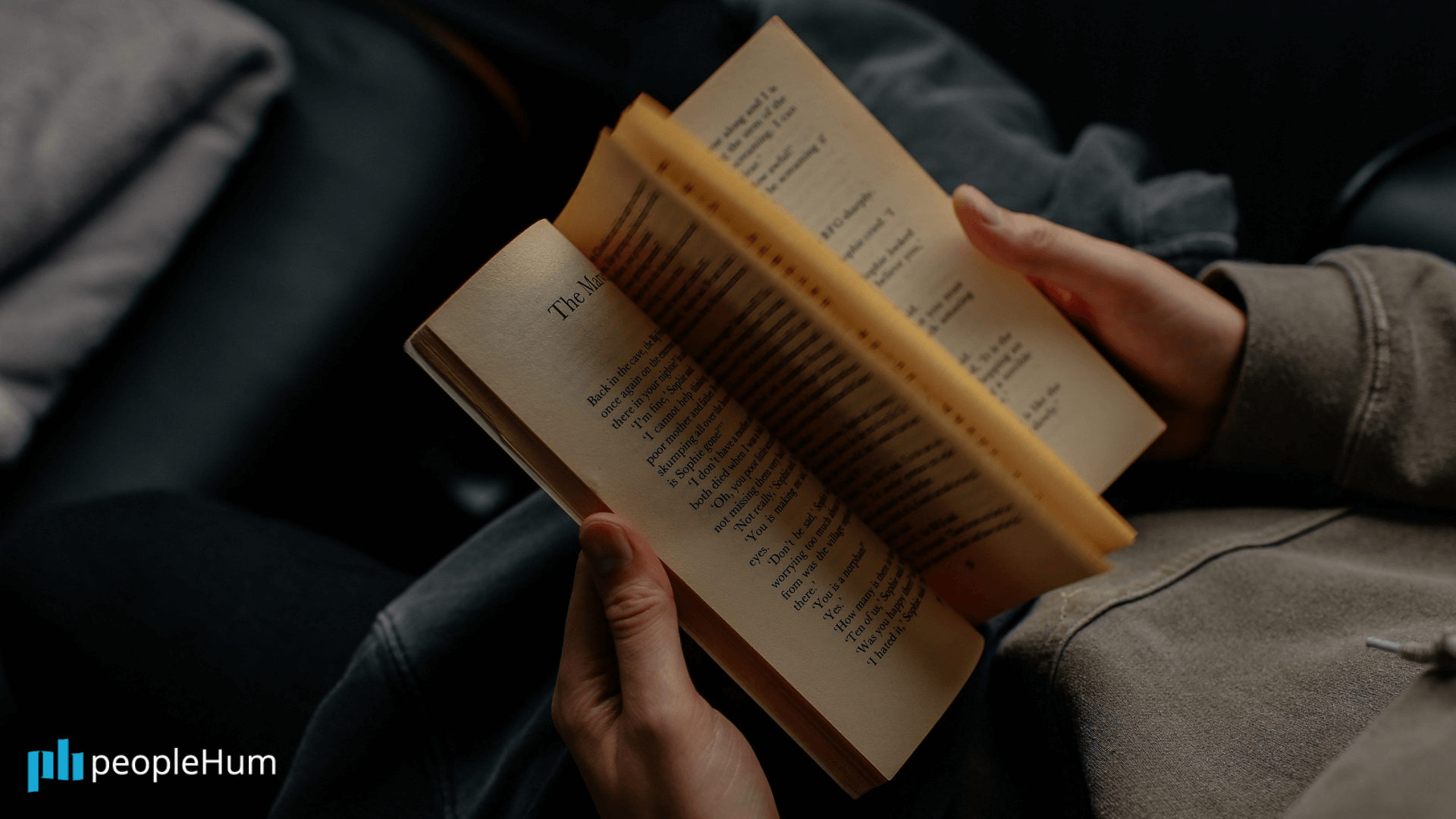 In my interviews with entrepreneurs, thought leaders, and influencers, I often pose the question, “What are the top three books everyone working in digital transformation needs to read?” Responses have ranged from the practical and analytic to the wild world of influential science fiction. In the spirit of the upcoming holidays, I thought I’d present the Top 10 books leaders read and recommend for those interested in disruption, digital transformation, and the fintech and Insurtech industries. There is just so much choice out there for reading material, and so much content – I thought I’d make everyone’s lives a little easier and give an orientation of the best books mentioned by my amazing interviewees.

1. Sapiens and its sequel Homo Deus by Yuval Noah Harari

These books were actually recommended by two of my interviewees: Frank Genheimer, managing director with New Insurance Business (NIB), and Dorota Zimnoch, Insurtech and Fintech Influencer. Written by famed historian Yuval Noah Harari, both books have been international bestsellers, and together they present two compelling sides of our species’ timeline. Sapiens reaches into humanity’s evolutionary past and traces its legacy forward – whereas Homo Deus turns its attention towards our future and beautifully illustrates the struggle to reconcile our strength as a species with our own mortality. From Dorota: “The first book talks about human history, busting many myths and explaining why people act today the way they do. And the second book focuses on impact of computer science, ethics, biology on future and where humankind is heading. Both are truly fascinating!”

2. Zero to One by Peter Thiel

A #1 New York Times Bestseller and third on the list of books leaders read, comes Zero to One, recommended by Chris Cheatham, CEO of RiskGenius. Entrepreneur and investor Peter Thiel presents to us an optimistic argument for new technological creation and innovation, based on the foundation we are in – in his logic – a technological stagnation, despite what it may seem. “This is the best book on tech,” Cheatham says, “and so many entrepreneurs don’t understand the key concept: Your tech [had] better be ten times better if you want to win.”

3. The Innovators by Walter Isaacson

In The Innovators, New York Times bestselling author Walter Isaacson (who also wrote the critically-acclaimed biography Steve Jobs) masterfully delivers us the stories of the people who invented the computer and the internet. It chronicles group genius – collaboration, innovation, and tales of success and failure. The Atlantic describes it as “riveting, propulsive, and at times deeply moving.” Robbie Bouschery, MD of PIRATE.global conferences adds, “[The Innovators] is a fascinating combination of history lessons around the invention of digital technologies, mixed with many mini-biographies and how different people have influenced each other to achieve greatness.”

4. The FinTech Book by Susanne Chishti and Janos Barberis

Recommended by Dorota Zimnoch, Insurtech and Fintech influencer (see Sapiens in this list), The FinTech Book is, “a collection of articles written by over 200 thought leaders sharing their views of Fintech,” she says. Created to be ultimate guide for the Fintech revolution and all therein, this book shares the latest industry developments and offers insights and perspectives from experts, recounting their own critical firsthand experience and providing information on investment and entrepreneurial opportunities, market dynamics, and much more.

5. Everybody Lies by Seth Stephens-Davidowitz

Book number five on the list of books leaders read is Everybody Lies, recommended by Daniel Schreiber, CEO of Lemonade, Inc. An economist from Harvard and former data scientist at Google, Stephens-Davidowitz distills big data from the internet to reveal to us novel truths of human behavior and the pattern of lying. “He analyzed anonymous Google search results, and his results are compelling,” Schreiber says.” A lot of what we’ve learned about why people are dishonest, and what sparks them to lie, is fascinating for us at Lemonade.”

Recommended by best-selling Fintech author Paolo Sironi, Nudge has been named Best Book of the Year by both The Economist and the Financial Times. It’s topic of choice is decision making, and it draws on current behavioral science knowledge to inform us of how we can make the best decisions for ourselves, our families, our communities, and our society. Sironi says, “He reminds us that we should focus on investors’ psychology while many FinTech entrepreneurs seem to place too much expectation on technology only.”

What list of books leaders read would be complete without our very own best-selling Fintech author Paolo Sironi, who is also an IBM Industry Academy member? You can read my interview with him here. This is the second in a trilogy dedicated to innovation in finance. Marketed as “a survival guide for the FinTech era of banking,” FinTech Innovation gives an in-depth analysis of the current massive global shift that is colliding tech-driven social transformation with outdated business models and solidified economic interests.

8. The Dip by Seth Godin

According to Christ Cheatham, CEO of RiskGenius (mentioned again in this list), The Dip is business blogger and bestselling author Seth Godin’s best book and a short, digestible read. “Ten-times better technology takes time. You will hit a new dip every single day. Pushing through the dip is key – 99% of people don’t get through the dip in some form or fashion,” Cheatham says. From Amazon: “[Winners] realize that the bigger the barrier, the bigger the reward for getting past it. If you can beat the Dip to be the best, you’ll earn profits, glory, and long-term security.”

You can read my interview with Tim Hughes, bestselling author and one of the most renowned experts on social selling here. In Social Selling, Hughes details how the landscape of buying and selling has changed with the rise of social networks. He provides for us a practical guide to sales in the digital world, framed as a step-by-step guidebook to success and sporting checklists, useful tips, and illustrative examples.

10. The One Thing by Gary Keller

The second to last addition to the list of books leaders read was recommended by Tobias Meier, Amazon marketplace power-seller. The One Thing reveals the powerful concept of focusing on only one thing at a time and its implications for success in both the personal and professional realms. Marketed mainly for those in the business realm, this book is aimed towards those who are single-minded in their goals to success and who are ready to narrow their focus to extraordinary lengths. Meir says, “It’s a great reminder of the value of focus and clarity of your priorities for achieving your goals.”

What is a booklist for tech folks without some science fiction? Below are those mentioned in my interviews with influencers:

The Foundation Trilogy by Isaac Asimov

According to Paolo Sironi, bestselling Fintech author, The Foundation Trilogy holds “a futuristic plot about the fall of the Galactic empire and the Psycohistorians’ effort to shorten the new Middle Age. Asimov depicts with great anticipation today’s intersection of big data (historical data), artificial intelligence (mathematical models to estimate the probability of future events based on history and human psychology), and social media (people interaction and social responses to news and fake news). It is fun reading, and also visionary.”

This bonus addition to the "top 10 books leaders read" list comes recommended by Pierre Pinna, CEO of IPFCONLINE. “[Dick’s] view of the future and the truly exceptional humanity analyzes, which lead to reflect on the functioning of human nature.” Written in 1968, Do Androids Dream of Electric Sheep? is a futuristic, dystopian novel introduced one of the first – if not the first – steampunk worlds within science fiction and explores foundational themes within “man vs. machine,” including our own concept of animals. This classic is a must-read if you have watched “Blade Runner.”

To see my own recommendations, check out my page Books I Love, which includes: Elon Musk, Tesla, Paypal and SpaceX, and the Quest for a Fantastic Future by Ashlee Vance and Jeff Bezos and the Age of Amazon by Brad Stone.