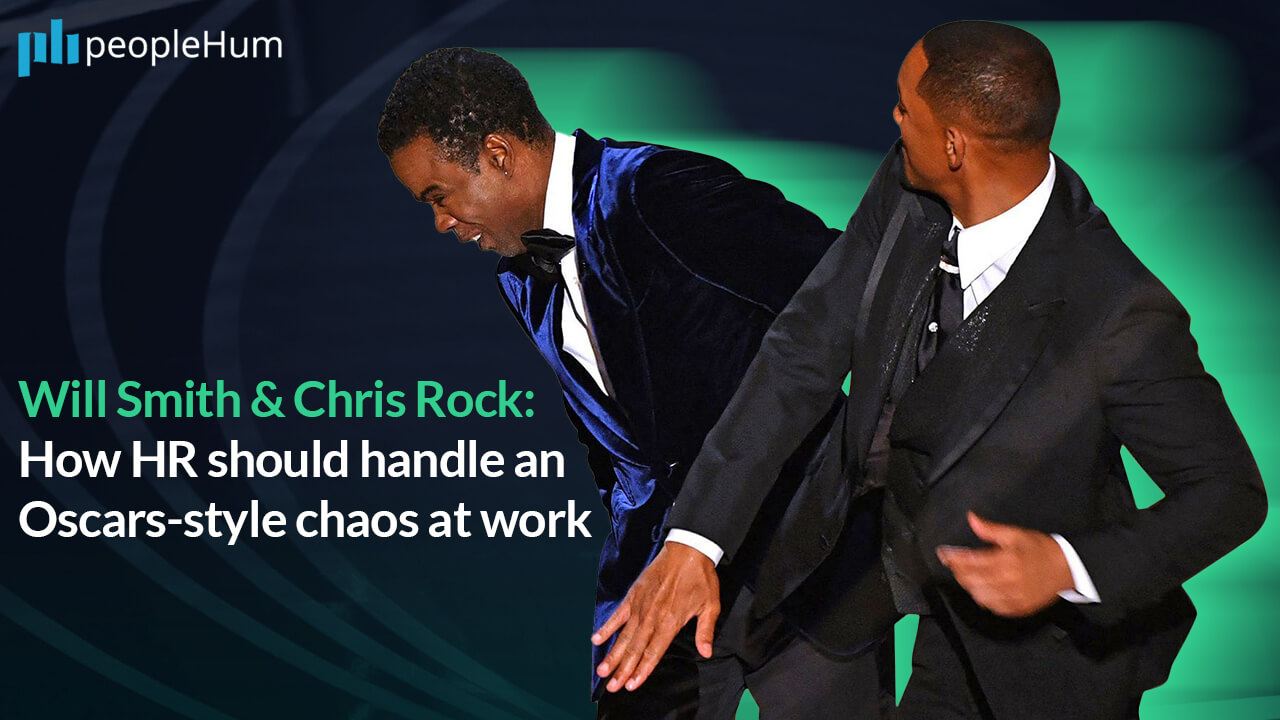 How HR should deal with Oscars-style chaos at work

A slap was heard around the world. That’s eye-opening (literally) for someone waking up to watch the Oscars at 6 in the morning, (that’s how early it was for Asia to process the chaos.)

What you’d usually expect from the Academy Awards is directors and actors giving teary-eyed speeches.

But here’s how it went. “Jada, I love you,” comedian Chris Rock said from the stage, quipping. Will smiles. Chris continues…

What happened next is - as Sydney Morning Herald calls - “the Oscars’ lowest moment in history.”

1) Prepare for the unexpected

This violence break-out stunned the viewers or even Chris for that matter. It wasn't immediately clear whether the clash was staged or not. “He walked up on stage and slapped him,” said Nick Viall. “I think most people just wondered if it was like a bit of a joke, if it was fake. I think pretty quickly we realized it was serious.”

Therefore you won’t always see it coming, just like Chris didn’t until the very second Will’s hand raised for a blow. That’s why it’s safe to alert your employees beforehand what is considered workplace violence. Encourage them to report incidences as soon as possible. Have a method in place for reporting dangerous or suspicious behaviour.

After the incident, Will & Jada’s son tweeted in response, ”And That’s How We Do It.”

“People are assuming Chris had knowledge of Jada’s condition when making that joke. Anyone know for sure? Regardless, it’s still a joke… you know… what Chris was hired to do - tell some jokes. Didn’t deserve to be assaulted for it?” - read an Instagram comment on BBC news.

When faced the need to apologize, HR and other executives can learn not to wait before taking accountability. Even though Will apologized to the Oscars for his behaviour that night, he made no mention of Chris. It was only until Monday when Will was direct and made it personal “I would like to apologize to you, Chris.”

An hour after the indicent, Will accepted the Oscar for Best Actor for King Richard.

But Smith admitted later on Monday, ”…a joke about Jade’s medical condition was too much to bear and I reacted emotionally.”

He pointed out, “I am embarrassed and my actions were not indicative of the man I want to be.”

HRs must try to understand what prompted the behaviour and if the culprit is really apologetic about it. So, create a management team trained to recognize the warning signs of potential violence. Learn to recognize employee behaviours that contribute to workplace violence, such as emotional disturbance and substance abuse.

4) Be ready to tell the truth

Writing for the Sydney Morning Herald, Michael Idato wrote “The issues here are thorny. Rock’s comedy was risky, of course, but Smith’s reaction felt unwarranted. It is difficult to see Smith striking Rock as anything other than assault, regardless of the provocation. And there is an unease which follows when one question is left unanswered: whether Hollywood will accept, and therefore, normalise what happened, or dare to call Smith to account…”

HR relates here to Hollywood or the Academy who is held responsible to make a decision. In cases where violence breaks out at work, HR should be responsible to put things in proper perspective and avoid future mishaps. HR can’t be apologetic about the behaviour of other employees at work but it should be willing to mend incidents with proper rules and regulations in place.

One thing is for sure: Chris Rock reacted admirably. Shortly after being slapped, Rock seemed cheering up instead of disturbed. “Oh wow, wow,” he said, smiling and shaking his head. “Will Smith just smacked [expletive] me.”

It wasn’t until Smith began yelling from the audience - his words bleeped out of the TV screen - that Rock’s composure hesitated. The comedian paused and looked off stage. “That was a... Greatest night in the history of television.”

Another tweet read, “Chris Rock is a comedian and did what comedians do. In fact, he behaved like a real man and has earned my respect.”

HR and company executives must try to maintain a cheerful attitude and treat others with respect. The atmosphere and culture of your office should be positive. Respect and decency should be extended to all employees. If you must fire an employee, do so respectfully and without taking away their dignity. Such work environment may effectively prevent the occurrence of workplace violence in the future.

6) Don’t leave anyone out

The HR department is usually the first to learn about and resolve workplace issues. That's why, HR must make sure to address all stakeholders about adopting a proactive and successful stance against workplace violence. All executives must be held accountable work together to prevent workplace violence.

Taking a holistic approach can help you stay compliance with the laws while also lowering the risk of workplace violence— a win-win situation.

How a series of social media comments spoke about the incident:

“This a criminal act on live TV and must be treated as such. The world is a sad place as it is, where people with power and fame think they are above the law.”

"I’m sorry but this sort of violence should not be glorified. Will lost all my respect. Confused why charges were not laid. This teaches people to resort to violence. Never the answer, sorry.”

These highlight the need to make everyone known about a ‘zero violence policy’ at work. Have a clear, written policy that communicates zero tolerance toward violence in any form. Determine in advance what discipline will be taken against employees who threaten or take violent action in the workplace, and follow through if such threats arises.