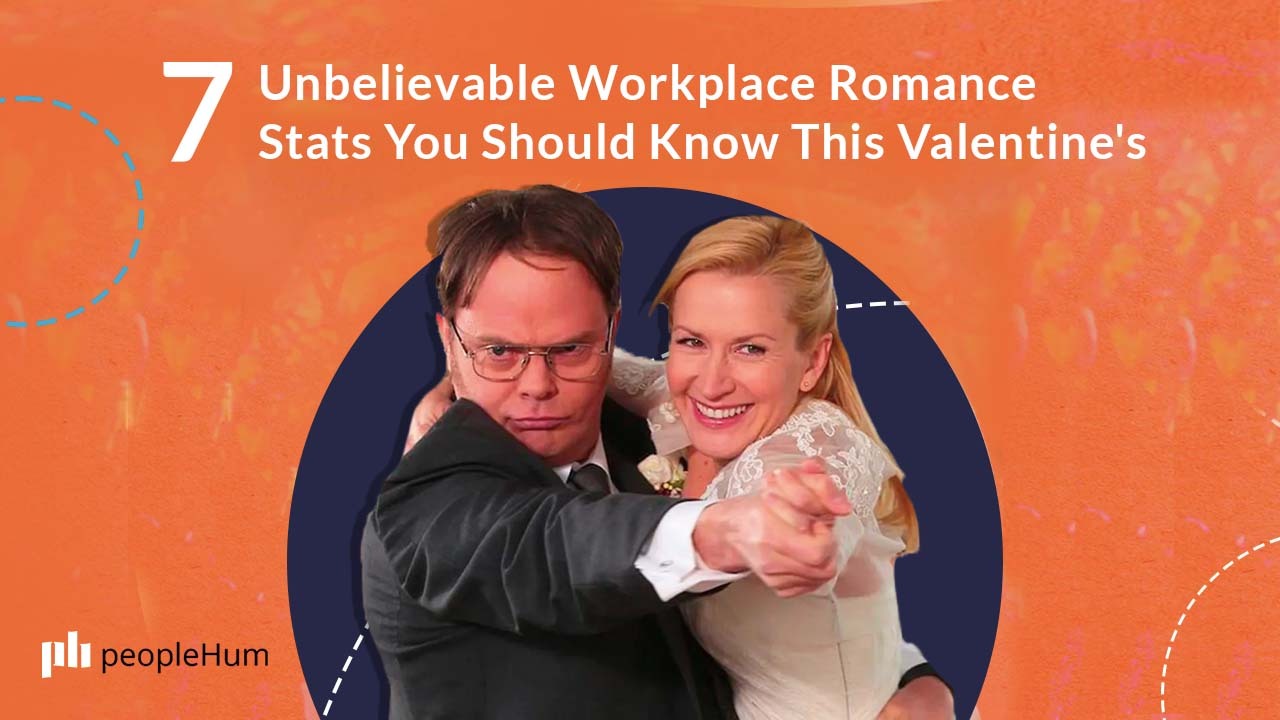 7 Unbelievable Workplace Romance Stats You Should Know This Valentine's

Workplace romance are nothing new in our culture – it's the stuff that makes movies & television so entertaining. NBC teased viewers of The Office for nine seasons with the "will they or won't they" tension between Jim and Pam (spoiler alert: they would and they did).

While it may appear that workplace romances are uncommon, they are actually highly popular and on the rise. According to a recent poll by the Society for Human Resource Management (SHRM), a whopping 33% of American workers are or have involved themselves in a professional relationship - that’s 6% more than pre-pandemic days when only 27% of employees had workplace romances! It seems like hardly anyone is worried that office romances are increasing - phew! According to a survey done by the SHRM, an impressive 75% of US workers are cool with coworkers getting together.

The manner in which management handles daily work can set the tone for workplace romance.

7 Workplace Romance Facts You Must Know

1. Almost all out of marriage affairs are a result of workplace romance

Workplace romance statistics reveal that 85% of affairs outside of marriage begin at work. (Good Therapy)

Late nights at the office, long work trips, mutual hobbies – it's easy to see why so many extramarital relationships start at work.  A huge portion of an average person's life is spent at work. It's no surprise that the workplace breeds romance with the intensity and collaboration created by work-related duties and extended time together.

2. Nearly half of those involved in a workplace romance are top level executives

Almost 40% of those who had an affair at work were the company's owners or executives. (SHRM)

3. To disclose or not to disclose is the new Shakespearian tale on workplace romance

If employees aren’t even ready to tell their friends about it, can they really be expected to know exactly when to tell their superiors? Is one date with a peer the threshold? Or one particularly flirtatious email exchange? If one or both people are still married and haven’t told their spouses, do they really have to tell their bosses first? - Yale Insights

The Proposal movie also follows Sandra Bullock and Ryan Reynolds as they attempt to deceive not only family, friends, and coworkers, but even an INS agent.

77 % of U.S. employees believe their employer does not require them to disclose a working romance, and the majority of those who have had office affairs (77 %) have not told their boss about it.

4. Many have no idea about their company’s take on workplace romance

Companies should consider their own workplace romance policies: How explicit are office affairs? And how well are they implemented? This is something that businesses owe to their employees.

41% of employees aren’t even sure what their company's policy on workplace romance is. (Vault)

With the above stats, it's no surprise that more than half of the workforce is involved in workplace romance. The problem with relying on policies is that most employees, especially in the C-suite, don't read, remember or care about them. That’s why these policies should be announced by HR in multiple formats – Zoom meetings, emails, videos, Slack channels, etc. – to ensure employees at all levels absorb the content.

Also read: How to enhance your company announcements

5. Chances of a future workplace romance are higher than you know

If given the opportunity, 72 percent of employees indicated they would get engaged with a co-worker again.  (Vault; Forbes)

The majority of individuals polled claimed they would leap into a romance at work, AGAIN. Many people stated that their previous relationships had little impact on their lives or careers.

6. COVID-19 is the matchmaker behind new workplace romances

More than a quarter of employees who are now in a workplace relationship have started a new workplace romance during the pandemic or continued an existing romance at work that began prior to the pandemic. (SHRM)

The proclaimed rules of businesses are all over the place. Some companies, such as UPS, had tight procedures in the past, terminating any managers who interact with lower-level employees, even if they are not direct reports. Companies used to deal with conflict like this by terminating the junior employee, who was nearly invariably a woman.

Corporate culture is an invisible force that guides employee behaviour. As per Mainiero, those working in a conservative culture, as opposed to a liberal culture, are less likely to engage in a workplace romance, with a fear of retaliation from management. Fast-paced and dynamic companies tend to be less stringent.

86% of surveyed women who worked for conservative orgs reported workplace romances was discouraged, whereas 50% of those for liberal orgs neither encouraged or discouraged it in their claims.

“Love Contracts” may not be the only solution

"Love contracts," according to 75% of HR professionals, are ineffective. (BambooHR)

When HR gets involved, they may require employees to sign a "love contract." These are written documents signed by a pair of employees starting a consensual workplace romance. A document proclaiming the relationship to be consensual and not the employer’s responsibility. Love contracts simply imply that businesses are more concerned with avoiding litigation than with the well-being of their employees.

Office romances have existed since the beginning of time. It's time for offices to figure out how to handle them.